“Do you know where we are going?” I asked Nataleigh as we rolled out of her downtown condo parking lot.

We had planned to hike in Elora, but neither of us had taken the time to look up the route nor our specific hiking destination. As social media pros in our day-to-day jobs, I guess we both figured that we could rely on our iPhones to guide us.

Or maybe it was foreshadowing to later that day when two digital gurus would have to dump their iPhones and rely on both paper and dirt maps to navigate the Elora Conservation Area.

The day started off on a high thanks to Nataleigh’s attention to detail. She delivered a vanilla latte from Starbucks when I arrived. But it wasn’t the kind gesture of a coffee at eight o’clock on a Sunday morning that was remarkable. It was the fact that she had demanded the black marker from not one, but two baristas, so that she could customize my cup.

In the end, neither would surrender their black Sharpie, so Nataleigh was forced to use a ball point pen to mark the cup. 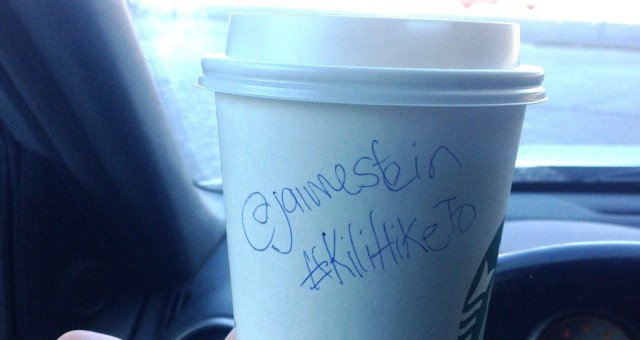 That’s right! She not only put my Twitter handle on it, but she also customized it with the official hashtag for the hike: #KiliHikeTO. Talk about dedication.

There’s extra humor to this story for readers who also follow me on Instagram. I regularly post photos of my Starbucks cups, which are often mislabelled by baristas who attempt to write “Jaime” on them. Some of the best names include: Jay, Jammi, Jammy, Jim, Jimmy, James, Jame, Jam and Gene.

Nataleigh and I met a couple of years ago when she was interning for the Toronto Argonauts. She was helping out with some digital communications for the team while I was heading up social and digital media for the Canadian Football League.

We regularly cross paths online as we roll in the same circles – but it has been ages since we’ve hung out in person.

After an eternity on the road, we finally weaved our way through southwest Ontario to the unincorporated community of Elora. Thankfully, driving through town doesn’t take very long, because it took us a couple of tries before we found the Elora Gorge Conservation Area and the genesis of our hike.

After paying our park fee, we were handed a map and told that there were plenty of hiking trails.

We pulled into the parking lot for hikers and it was empty. It was time to blaze our own trail.

After glancing at the map, we decided to wing it and headed into the trees past a series of warnings signs reminding us to stay back from the gorge, which was about a 20-30 foot drop.

When in doubt, I always go right. Bad decision. We made it about 100 feet and ran into a big fence that marked the edge of the conservation area. We were forced to turn around, so we made our way along the narrow, rocky path to a set of stairs that led down below some cliffs to a platform overlooking the gorge.

The view was spectacular. We took some pictures and watched a group of people try and navigate the river in canoes and kayaks. The water was moving pretty fast. 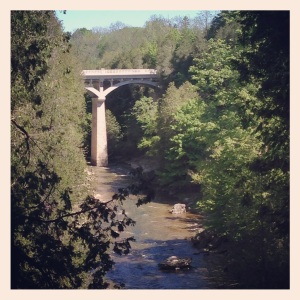 We followed the trail along the wall of the gorge until we hit a bridge. We crossed over and made our way back along the opposite side of the gorge. We reached a second fence – one with a hole in it – so we decided to see what was on the other side.

We ran into a nice woman who drew us a map in the dirt and tried to explain to us how we could complete a circle and make it back to our point of origin. Unfortunately, her Jack Russell Terrier kept grabbing the stick out of her hand, so the map was a mess.

We did find the bridge to take us back over the gorge. However, we ended up on the main street in town. Instantly, our gorge hike turned into an urban jaunt complete with fudge shops and small town knickknacks.

Eventually, we found the dirt trail that led back to the conservation area. That’s where we encountered two lovely old ladies who were quick to inform us that the trail ended and we would not be able to get past the fence.

“Well, there is a hole in the fence that you could crawl through,” said one of the women. “Although, I’m not sure you’ll fit,” she added, looking squarely at me. “You’ll get pretty dirty crawling along the ground.” 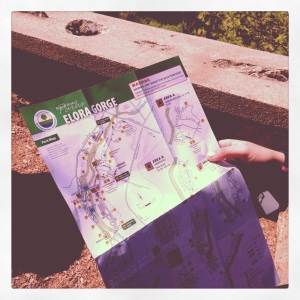 Nataleigh and I are both the type of people who relish this sort of challenge. So we approached the fence and saw the hole. It was the same fence that had blocked our way when we started our hike. But we had missed the hole.

A second later, Nataleigh lunged up onto a low wall and propelled herself over the fence. The old ladies watched with wonder.

Now it was my turn to hurdle the barrier that stood between us and the end of our hike.

Nataleigh is much taller than I am, so I entered this challenge at a disadvantage. Nevertheless, I hopped up on the wall and leveraged myself off the bent metal fence and over the top. I landed gracefully on the other side. The old ladies looked a bit shocked and made another comment about how they weren’t sure if I was going to make it.

“I’m a lot more determined on the inside than my physical appearance may let on,” I joked.

The four of us shared a laugh before Nataleigh and I continued on our way to complete the hike – a 7.4 km tour of Elora.

The combination of misadventures and the company made this one of my more enjoyable and memorable hikes. We covered a broad range of topics from politics to social media to career anxiety.

Career anxiety is a topic that I’m very passionate about. I believe that the pressure on Generation Y is intense because tools like LinkedIn allow for career benchmarking. I love LinkedIn, but the fact that resumes and career accomplishments are so out in the open can lead to people feeling like they are falling behind. This is one reason why I think Generation Y is at odds with current workplace hierarchies.

People expect to be VPs by the time they turn 30 because they see other people their age with similar titles. The only problem is that people often give themselves bogus titles. We all know someone who calls themselves a CEO despite being in charge of a sole proprietorship.

Nataleigh expressed some concerns with her career progression, but she has nothing to fear. Her energy and enthusiasm are boundless and her knowledge of social media at a business level is strong. She currently leads the social media training for a large real estate firm, helping brokers develop new ways to market themselves in a rapidly changing landscape. This is impressive.

It is always energizing to be around people who have strong drive and big ideas.

The past week or so has been awesome on the training front. On Friday night I was back running hill sprints. Saturday I fit in a 16.5 km bike ride through the Don Valley. Sunday was the hike in Elora. Monday I was able to get in 45 minutes of cardio followed by a great stretch, all before work. I completed the two-a-day on Monday night in the gym with Marshall.

The Friday night hills thing is starting to take off. Chris and Heidi joined me after work to run hills in Blantyre Park. We did three sets of 10 sprints up the grass hill. I started strong, but faded fast, getting lapped by both Heidi and Chris near the end.

I felt good after the sprints, but during the exercise, I felt like my heart was going to explode from my chest.

This leads to my next area of intrigue. Tanya, who blew past me on the Grouse Grind a couple of weeks ago, went for a VO2 Max test this week at Peak Centre. Peak Centre is providing testing and training support for the #Climb4Cord. I’m visiting their Ottawa location in June when I’m in town for some campaign board meetings with Canadian Blood Services.

After hearing about the test from Tanya, I’m a little terrified to take it and also find out the results. The good news is that I should gain some valuable insights and still have six weeks to make any necessary adjustments to my training schedule before I leave for Africa on August 3rd.

Jaime is the Senior Manager, Social Media at Hootsuite. He is a digital marketer with expertise in social media and content marketing. His experience stems from leading the social media strategy for two national brands. Jaime holds an MBA with a focus in Marketing and Strategy from the Rotman School of Management where he was selected valedictorian by the students of the Morning MBA Class of 2011. He is the former radio voice of the Toronto Argonauts and currently lives in Vancouver with his wife and two sons.
View all posts by Jaime Stein →
This entry was posted in Community, Social Media, Toronto, Travel and tagged Africa, Canadian Blood Services, Climb4Cord, climbing mt kilimanjaro, cord blood bank, Elora, Elora Conservation Area, Elora Gorge, For All Canadians, health, healthy-living, hiking, ICE, KiliHikeTO, Kilimanjaro, Mountain, Nataleigh Ballantyne, nature, Networking, outdoors, Social Media, Tanzania, Volunteer. Bookmark the permalink.
Loading Comments...
%d bloggers like this: