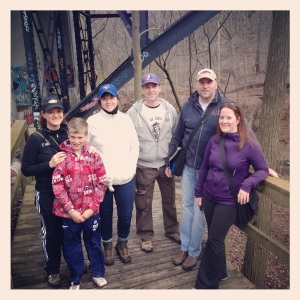 Like the old childhood cartoon where the snowball gathers momentum as it tumbles down a hill, this week’s hiking group formed with the same level of intensity.

Some might credit the media coverage from Inside Toronto this past week for the surge in interest, but it was likely the weather that led to an increase in attendance.

Originally, only Caron and I were scheduled for a #KiliHikeTO on Sunday – the 11th straight week on my hiking program. When all was said and done, seven of us navigated in a circular route that originated at the Don Valley Brickworks.

“How does everyone know each other?” asked David, the co-chair of the campaign For All Canadians, and the lone non-social media user in the group.

The answer to his question is what makes this week so interesting.

Aside from David and Erin, I initially met each hiker through social media.

Caron and I met for the first time at Jugnoo’s Social Mix conference this past July at the Fairmont Hotel in Toronto. We started Tweeting at each other and ended up connecting face-to-face during one of the breaks. We discovered that we had a lot in common – namely a Ryerson Journalism connection – and we kept in touch on Twitter after our initial meeting.

I like Caron’s attitude when it comes to social media. She has no issues approaching people and engaging with them, be it online or offline. She’s also well known for her epic Movember awareness campaign.

A consultant for Jugnoo at the time of said conference, Andrew and I first connected online a few years back when he was mentoring a classmate of mine from The Rotman School.

Andrew is a social media O.G. – he’s been in the game for a lot longer than most people I know and he’s able to discuss social media at a very complex level. As we plodded along the trails, I often found myself listening intently to his thoughts as if I were the really keen student in the front row of a first-year lecture. 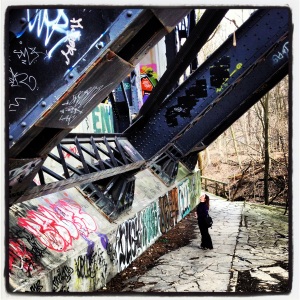 Let’s jump back to the Ryerson angle of this intricate web, where we will find Erin. She and I worked together when I served as the President of the Ryerson Journalism Alumni Association. Erin represented Ryerson Alumni Relations at the time and frequently supported our group and its activities.

We have stayed in touch over the years – mostly through Twitter where her tone is refreshing. I have grown fond of her frequent updates about Ryerson and her ability to connect with young alumni.

Caron and Erin (say that out loud, it’s fun) also participated in #BeerHikeTO last weekend and are quickly entrenching themselves as leading members of the #Climb4Cord All-Star Support Crew.

Speaking of all-star supporters, Rachel and her son returned to the #KiliHikeTO trails for a repeat visit. You may recall them from my Week 6 hike. They officially become the first two-time hikers on this journey. I met Rachel in 2010 at a social media conference in Toronto and we’ve continued to cross paths ever since.

Her son delivered the line of the hike when he asked David, “What team is that?” as he gestured towards his Montreal Expos hat. David, a proud Montrealer, knew right away that a 12-year-old would have no reason to know who the Expos were. The rest of us simply felt all that much older as a result of the query.

So how does David fit into this mix aside from his association to the campaign For All Canadians?

David and I have supported Canadian Blood Services together since 2006. Initially, we helped build awareness for bone marrow donations by contributing to the rebranding efforts of One Match. Now we are linked in our quest to build a national public umbilical cord blood bank.

David has served as a mentor and friend for nearly seven years and has provided heaps of invaluable advice along the way. He was also a strong influence on my decision to return to school in 2008 to earn an MBA.

We also share a strong connection to this campaign. I lost my father to leukemia in 2006 while David nearly lost his daughter to chronic myelogenous leukemia when she was 10-years-old. Fortunately, she received a bone marrow transplant and as a result continues to enjoy a happy and healthy life.

When the day started, I was unsure of how this eclectic group would interact on a long hike through Toronto’s ravine system. At the start, everyone paired off with a familiar partner. But once we got moving, new groups would connect and disperse as each person had a chance to interact with one another over 2.5 hours and 8+ km.

We couldn’t have asked for a nicer morning to hike. The glorious sunshine was energizing and the muddy trails presented a welcome change from the snow and ice of winter, which continues to show its ugly face as we creep towards May.

One of the positive signs from Sunday’s hike is that I was energized and ready to go another 8 km when we returned to the start of our route. This is a testament to the training regimen that Marshall has designed for me.

My legs and core continue to get stronger and I’m starting to lean out. I still have a lot of fat to shed before I get to the point where I will be ready for the climb, but as long as we are making progress, I’m happy.

I’m also looking forward to the warmer weather where I can get outside in the evenings and start running some sprints in the local park after the kids go to bed. That being said, time management continues to be a challenge. I’m often asked how I juggle my schedule. Honestly, some days even I’m not sure how I do it. For example, I’m off to Vancouver on Wednesday night for a work trip, returning Friday night.

I’m also trying to be very conscious of my health. In the past, I have ended up sick from overextending myself. So I’m taking extra care of my body by doing little things that will hopefully make a difference. I’m trying to go to sleep 30 minutes earlier each night and I’m setting my alarm clock 15-20 minutes later to sneak in some additional rest in the morning.

I’m also paying closer attention to nutrition. Additional fruits and vegetables have been added to my diet to try stave off illness. I’m also reducing my alcohol intake, as much as it pains me to explore less craft beer over the short term.

Lastly, and likely the most difficult challenge, is avoiding people who are sick. Unfortunately, my youngest son is battling a cold right now and it takes all my willpower not to snuggle my face right next to his. The ability of kids to breed germs and spread them is astonishing, but taking a few steps of extra care can mean the difference between staying healthy and ending up in bed for a week. Trust me; this happened multiple times when my older son was an infant.

It has been 79 days since I started training for the #Climb4Cord and I’m 109 days away from departing for Tanzania. Each day, it starts to feel more real. I’d be lying if I didn’t say that I was a bit apprehensive about the climb. I wonder if I will make it to the top; if I will get sick along the way; or suffer from any number of issues that could prevent me from summiting.

Ultimately, when the going gets tough during training, I think of my dad. That’s enough to get me over the mental hump and back on the road to success. I’m also very thankful for the support that I have received from family and friends. It motivates me more than you’ll ever know. Thank you.

Jaime is the Senior Manager, Social Media at Hootsuite. He is a digital marketer with expertise in social media and content marketing. His experience stems from leading the social media strategy for two national brands. Jaime holds an MBA with a focus in Marketing and Strategy from the Rotman School of Management where he was selected valedictorian by the students of the Morning MBA Class of 2011. He is the former radio voice of the Toronto Argonauts and currently lives in Vancouver with his wife and two sons.
View all posts by Jaime Stein →
This entry was posted in Community, Social Media, Toronto, Travel and tagged Africa, Canadian Blood Services, Climb4Cord, Don Valley, Evergreen Brickworks, For All Canadians, health, healthy-living, hiking, ICE, Influencers, KiliHikeTO, Kilimanjaro, Mountain, nature, Networking, outdoors, Rotman School of Management, Social Media, Tanzania, Toronto, Volunteer. Bookmark the permalink.

1 Response to Social Climber: Connecting the group of seven